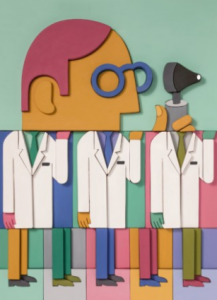 By 2010, Bill Haynes had spent almost four decades under attack from the inside of his skull. He was fifty-seven years old, and he suffered from severe migraines that felt as if a drill were working behind his eyes, across his forehead, and down the back of his head and neck. They left him nauseated, causing him to vomit every half hour for up to eighteen hours. He’d spend a day and a half in bed, and then another day stumbling through sentences. The pain would gradually subside, but often not entirely. And after a few days a new attack would begin.

Haynes (I’ve changed his name, at his request) had his first migraine at the age of nineteen. It came on suddenly, while he was driving. He pulled over, opened the door, and threw up in someone’s yard. At first, the attacks were infrequent and lasted only a few hours. But by the time he was thirty, married, and working in construction management in London, where his family was from, they were coming weekly, usually on the weekends. A few years later, he began to get the attacks at work as well. full article

The New Boundaries Between Doctors and Patients

Seeing the Patients Behind the Numbers

Finding Who We Are in Those for Whom We Care