In my daily work as a primary care internist, I see no letup from pain. Every single patient, it seems, has an aching shoulder or a bum knee or a painful back 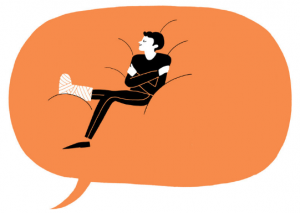 “Our bodies evolved to live about 40 years,” I always explain, “and then be finished off by a mammoth or a microbe.” Thanks to a century of staggering medical progress, we now live past 80, but evolution hasn’t caught up; the cartilage in our joints still wears down in our 40s, and we are more obese and more sedentary than we used to be, which doesn’t help.

So it’s no surprise that chronic arthritis and back pain are the second and third most common non-acute reasons that people go to the doctor and that pain costs America up to $635 billion annually. The pain remedies developed by the pharmaceutical industry are only modestly effective, and they have side effects that range from nausea and constipation to addiction and death.

What’s often overlooked is that the simple conversation between doctor and patient can be as potent an analgesic as many treatments we prescribe.

In 2014, researchers in Canada did an interesting study about the role of communication in the treatment of chronic back pain. Half the patients in the study received mild electrical stimulation from physical therapists, and half received sham stimulation (all the equipment is set up, but the electrical current is never activated). Sham treatment — placebo — worked reasonably well: These patients experienced a 25 percent reduction in their levels of pain. The patients who got the real stimulation did even better, though; their pain levels decreased by 46 percent. So the treatment itself does work. continua a leggere

The Power of Narrative Medicine

Narrative Medicine – the power of the narrative