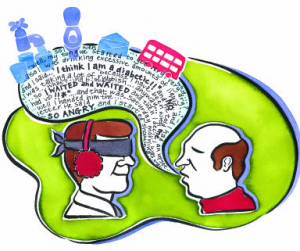 One day when Pooh Bear had nothing else to do, he thought he would do something, so he went round to Piglet’s house to see what Piglet was doing. It was snowing as he stumped over the white forest track, and he expected to find Piglet warming his toes in front of the fire, but to his surprise he saw that the door was open, and the more he looked inside the more Piglet wasn’t there.

This excerpt from the opening chapter of a well known children’s story illustrates a number of features of narrative as a linguistic form. Firstly, it has a finite and longitudinal time sequence—that is, it has a beginning, a series of unfolding events, and (we anticipate) an ending. Secondly, it presupposes both a narrator and a listener whose different viewpoints affect how the story is told. Thirdly, the narrative is concerned with individuals; rather than simply reporting what they do or what is done to them it concerns how those individuals feel and how people feel about them. Both Pooh Bear, trudging hopefully through the snow, and Piglet, mysteriously absent from his usual place beside the fire, are already characters in the story rather than merely objects in the tale.

The narrative also provides information that does not pertain simply or directly to the unfolding events. The same sequence of events told by another person to another audience might be presented differently without being any less “true.” This is an important point. In contrast with a list of measurements or a description of the outcome of an experiment, there is no self evident definition of what is relevant or what is irrelevant in a particular narrative. The choice of what to tell and what to omit lies entirely with the narrator and can be modified, at his or her discretion, by the questions of the listener. full article

Narrative Medicine – the power of the narrative

Sharing and Healing Through Storytelling in Medicine

Ways on How to Play Tennis like a Pro